Cocaine is a stimulant derived from the leaves of the coca plant, usually sold in a white powder or synthesized into crystals or rocks as “crack.” As a stimulant, cocaine enhances activity in the body’s central and sympathetic peripheral nervous system.

Snorting, smoking, or injecting the drug elicits a brief euphoric, energizing, and exhilarating feeling that lasts a few minutes to an hour, producing an exhilarating experience for the user who may feel enhanced self-esteem, improved physical and mental performance, and higher levels of activity. This is then followed by an unpleasant comedown when the effects of the drug ease off. The high and short-term effects are typically short-lived, which may lead to repeat dosing over several hours or even days. Repeat use in this manner is typically followed by a “crash,” which leaves the user feeling fatigued, anxious, and depressed.

Although cocaine remains legal for medicinal use, its highly addictive potential limits its use as an anesthetic and today it’s mostly used illicitly. The drug is classified as a Schedule II narcotic by the U.S. Drug Enforcement Agency. Despite its high potential for abuse, the drug remains popular: In 2019, 2 million Americans over the age of 12 admitted to using cocaine within the past month. 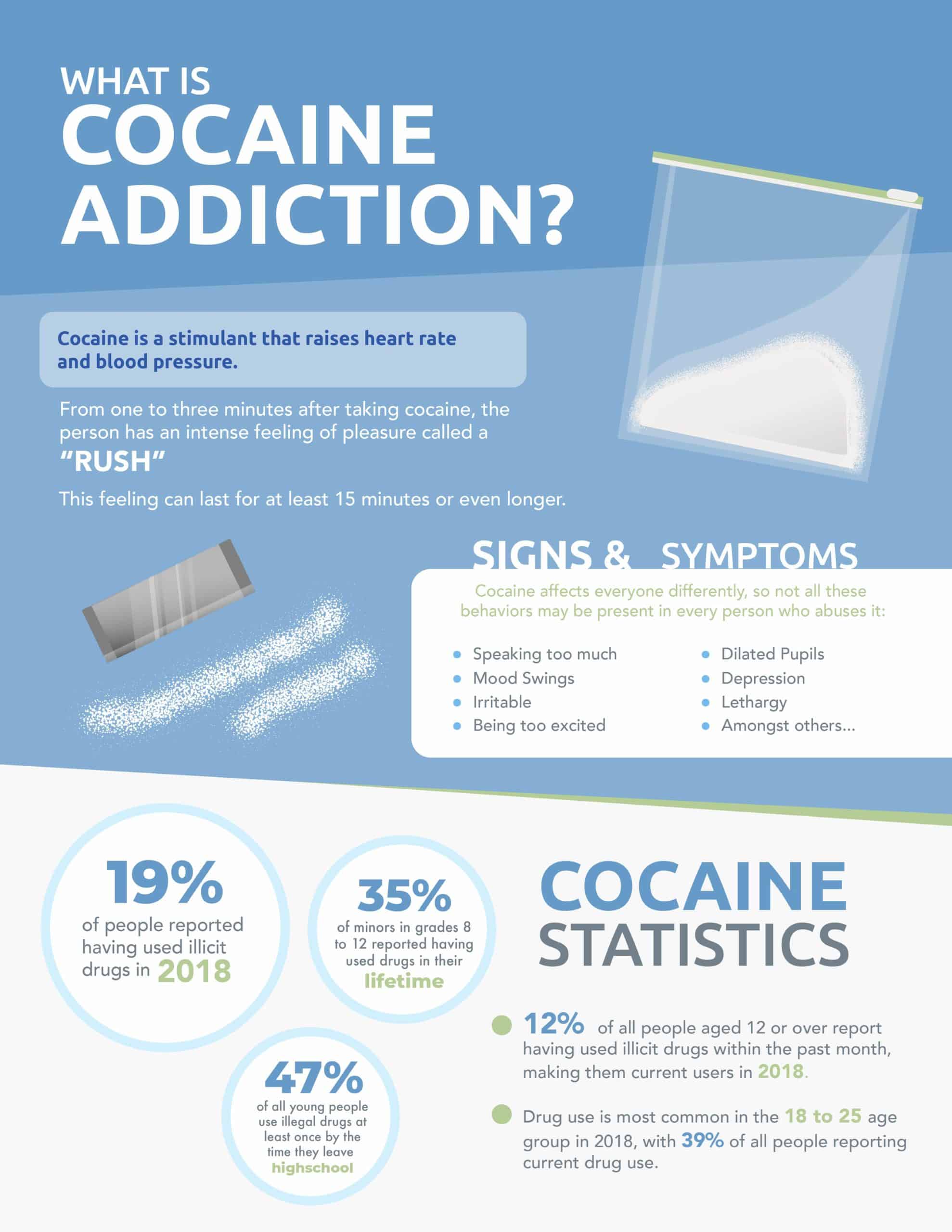 How Is Cocaine Used?

Users take cocaine in a variety of ways. Cocaine can be:

One of the most dangerous aspects of cocaine abuse is that cocaine dealers often mix their cocaine with other products and some other drugs to increase their supply. The average purity of seized cocaine in the United States is about 50%.

The list of products cocaine can be mixed with is long, ranging from relatively harmless powders like sugar and starch, to more dangerous substances such as veterinary products, methamphetamine (also known as meth), and opioids. In fact, the practice of cutting cocaine with fatal opioids like fentanyl appears to be gaining prevalence in recent years.

Between 2016 and 2017, the number of reports from forensics labs of fentanyl and cocaine increased by 74% according to the DEA. And in 2018, 74% of cocaine-involved fatal overdoses also involved an opioid (a 2.4% increase from the previous year).

Cocaine is considered a highly addictive substance, largely because the substance slows down or even prevents the brain from discarding dopamine—the chemical associated with reward, motivation, and emotion. This produces a short-lived but very intense feeling of euphoria, in which long-term use can restructure the brain.

Research shows that cocaine abuse increases stress levels in individuals, suggesting that the drug also interferes with the ventral tegmental area of the brain. The high a single dose of cocaine produces lasts only a few minutes to an hour, encouraging repeated use to keep the “high” going and to avoid subsequent crashes.

Any use of cocaine is considered abuse because it is an illegal substance. How people use cocaine also alters the potency and duration of the effects. The effects of snorting it are short-lived, lasting approximately 15-30 minutes. Smoking or injecting cocaine is more intense but lasts for an even shorter period, about 5 to 10 minutes. Most cocaine users will dose frequently in order to maintain the desired effects. Injecting the drug poses a higher risk of overdose than snorting.

Cocaine abuse is particularly dangerous because continued use can cause strain on the heart. The most common cause of death in frequent cocaine users is stroke or cardiac arrest. 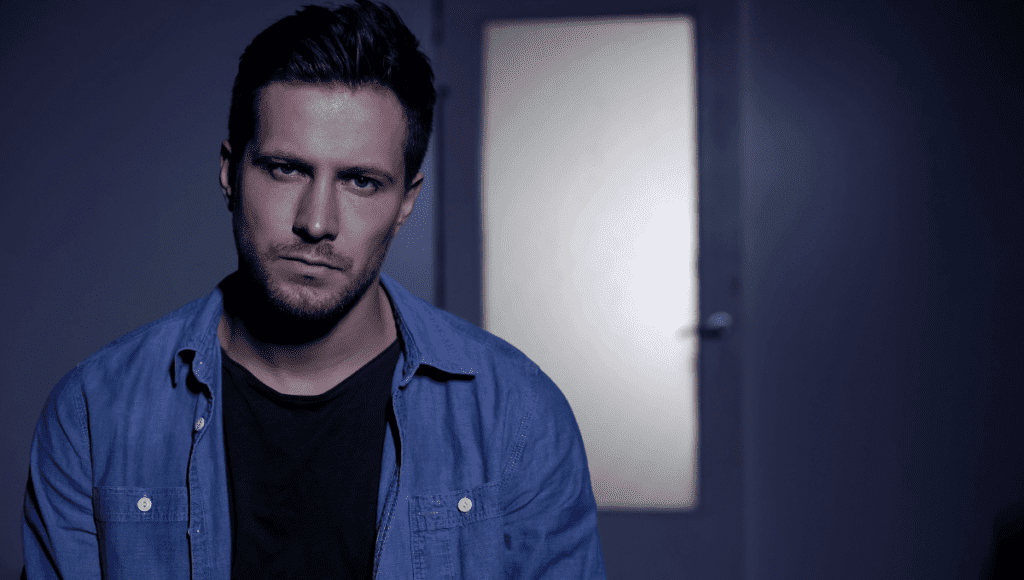 Cocaine is a highly addictive drug, but it may be hard to recognize an addiction to it. Craving cocaine and ignoring the consequences that come with it are signs of an addiction.

The psychological addiction is often the hardest part to overcome, although there are undeniable physical symptoms of addiction as well. Someone who uses cocaine frequently will develop a dependence on it, meaning they need to have it in order to feel normal. Once dependence has developed, a tolerance will develop and withdrawal symptoms will occur when attempting to stop the use of the substance. Once someone becomes addicted to cocaine, it can be very hard to stop. This is because cocaine abnormally increases the level of dopamine in the brain, eventually reprogramming the brain reward system.

Continued cocaine abuse in all its forms carries many dire health risks and adverse long-term side effects to practically every one of the body’s major functions, particularly the body’s cardiovascular system. Cardiac complications include disturbances in heart rhythm and heart attacks, as well as inflammation of the heart muscle, deterioration of the ability of the heart to contract, and aortic ruptures.

People who abuse cocaine may also become malnourished as the abuse of cocaine interferes with appetite and feeding. Users sometimes neglect healthy eating habits when on a binge and the drug reduces blood flow in the gastrointestinal tract, causing ulcers and tears. Cocaine abuse has also been shown to harm the liver and kidneys and can even cause renal failure in extreme cases of constant or prolonged use.

Other life-threatening health risks include:

In the case of expectant mothers, cocaine abuse poses a high risk of harming the fetus. Cocaine decreases blood flow to the uterus, robbing the fetus of oxygen, and resulting in raised heart rate and blood pressure. Babies born from mothers that abused cocaine during their pregnancy have an increased risk of heart defects, problems with the central nervous system, and even death. Despite the dire risks, there are about 750,000 cocaine-exposed pregnancies each year.

“Crack lung”—the term that describes the type of damage frequently afflicted onto the lung sacks by smoking cocaine—can cause labored breathing, fever, coughing up blood, and even complete respiratory failure.

Injecting cocaine is perhaps the most dangerous method of administering the drug. This is because of the increased risk of overdose as well as the various complications and infectious diseases associated with needle drug use. These include abscesses and skin infections, endocarditis (inflammation of the heart), HIV, and hepatitis.

Cocaine use also carries the immediate risk of overdose. An overdose of cocaine can result in a seizure, heart attack, cardiac arrest, or stroke—and may in most cases prove deadly. 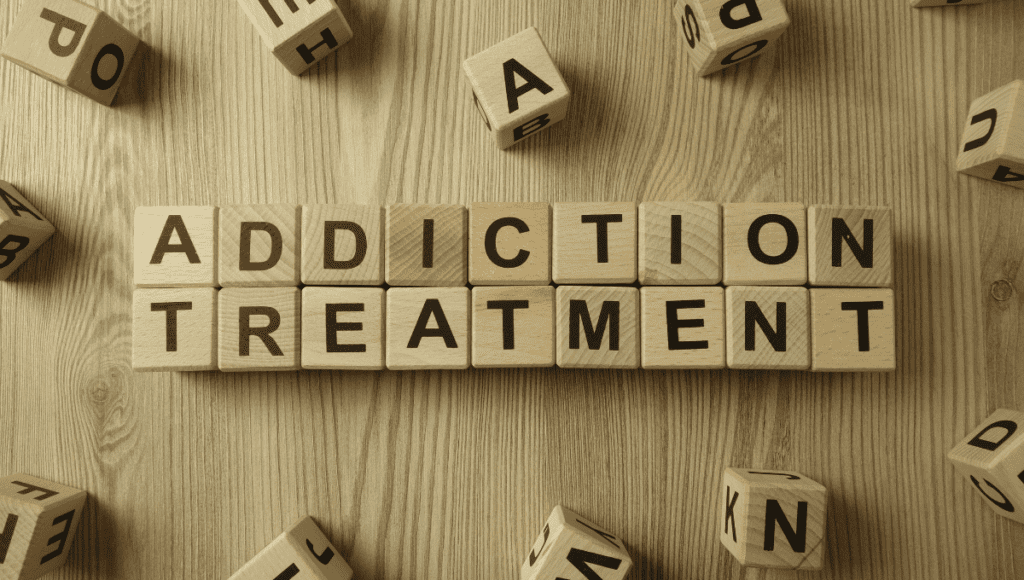 Treating cocaine addiction often begins with medical detoxification, which typically lasts up to a week. However, completing detox is only the beginning of rehabilitation treatment. Once a patient completes detox they can begin rehabilitating in an inpatient or outpatient facility. One of the most important aspects of successful treatment is that patients remain in the program for an adequate amount of time, which may be from as little as 30 days or as long as 90 days, or longer depending on the severity of the diagnosed addiction.

Although potential pharmaceutical treatments for cocaine dependence are ongoing, there are currently no FDA-approved medications available for either cocaine detoxification or longer-term treatment of cocaine use disorders. This means the primary treatment for cocaine abuse comes in the form of behavioral interventions and cognitive training.

What Is Cocaine? Structure, Addiction And Importance

Addiction to cocaine can be hard to beat. However, help and resources are available for people who are ready to take their life back. You deserve to live a life where you feel emotionally safe and we can help you heal the mental, emotional, and spiritual wounds of addiction and create a life that feels fulfilling. Contact our recovery centers today for a free, confidential consultation. 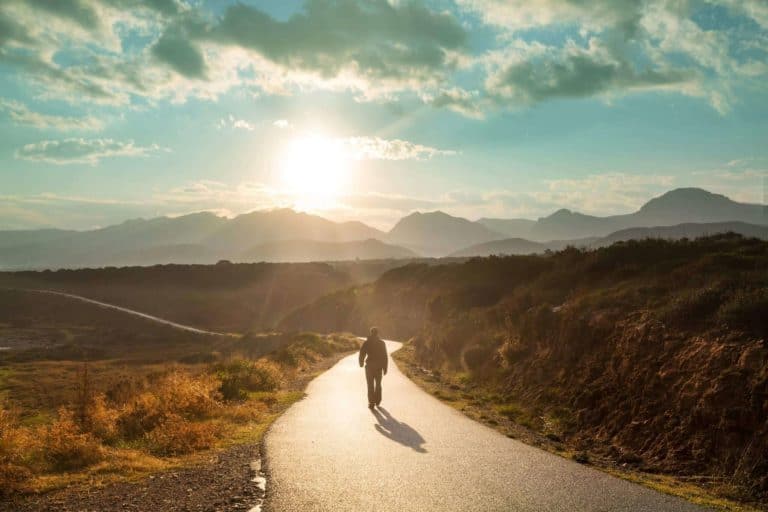 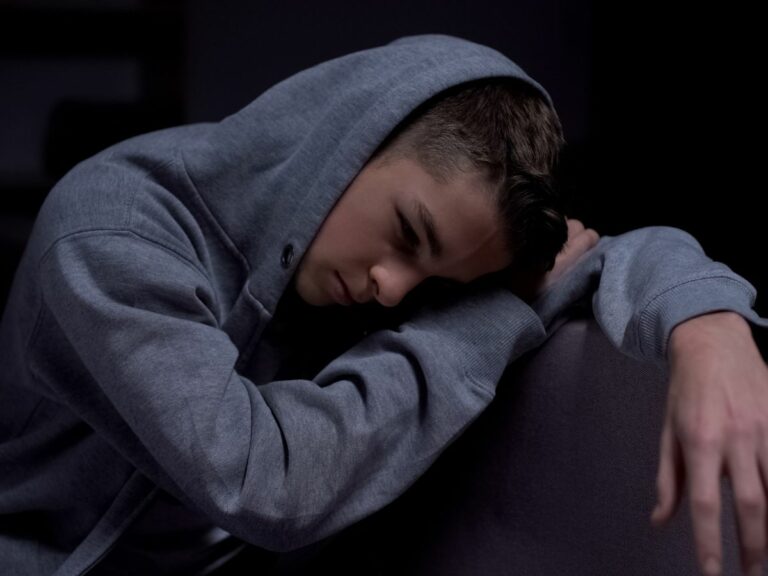 What Is Cocaine? Structure, Addiction...